Today was a first as on my placement in the Roborough Team Ministry I preached the same sermon to two different congregations in two different, beautiful, historic churches – St Edward’s Shaugh Prior and St Mary’s Bickleigh.

You can listen to the sermon here (this is the recording made at the 11am service at St Mary’s):

Check this out on Chirbit
Here is the text of the sermon – probably the most difficult bible passage I have preached on so far!

Let’s imagine ourselves in our gospel reading today. Perhaps you’re one of Jesus’ friends, or you’ve simply heard of this Jesus and want to see him for yourself, he’s walking quite briskly along the road you know leads to Jerusalem. You’re jostling with the crowd, trying to get a good view of him, trying to get near to hear what he is saying. Suddenly, Jesus stops in his tracks, turns around and looks at you – his gaze moves around the crowd, lights on you for a moment and then moves on to take in the number of people who have been following him. Then he opens his mouth and says ‘If you want to follow me, you must hate your father and mother, wife and children, brothers and sisters. You must hate your own life. If you want to be my disciple you have to carry the cross and follow me.’ You turn to the person next to you, ‘what did he say? Did he say we have to hate our family?’ Then Jesus carries on walking, leaving the crowd behind and you are left with the thought – do I want to hear more? Do I want to follow this man? What does it all mean?

The Kingdom of God is a topsy turvy kingdom. Everything in God’s kingdom is upside-down. The first are last. The last are first. The rich are poor. The poor are rich. The Kingdom of God is full of surprises. When Jesus first appears in our gospels his first words are ‘repent! For the Kingdom of God has come near’. It’s a tricky word repent. Like a lot of Greek words, it can mean a number of different things. The Greek word is Metanoia – incidentally the name of the band we were working with at Greenbelt! Metanoia means to change, to turn around or to change one’s perspective. Jesus calls us in the gospels to repent – to see the world in a completely new way. One way of putting it is to say ‘wake up! I have a new way to live, follow me!’ The stories and parables up to this point in Luke’s gospel have demonstrated this topsy turvy world. Last week we heard Jesus say, don’t try and get the best seat at a banquet, sit in a lowly seat and you may be invited to move up. Jesus is telling the crowd to do the opposite to what their culture was teaching them.

In Jesus’ day, family ties were everything – they related to where you lived, what sort of job you had and how far you could get in life. Your family was related to your status. Jesus takes one of the Jewish commandments – to honour your mother and father – and transplants the word honour with the very strong word ‘hate’. It brings you up short doesn’t it? I have to admit, my heart sank when I saw I’d have to preach on this passage today! It sounds harsh, but it’s supposed to. It’s Jesus’ way of saying ‘repent! Wake up! Do you really want to follow me? My way is different from anything you’ve ever known.’

Then Jesus tells two parables, one about a man deciding to build a tower and the other about a king considering going to war – I couldn’t help but think if Jesus was telling the parable today he’d be talking about Barack Obama and the situation in Syria. The point of these parables is two-fold, I think. Firstly, Jesus is saying ‘think about this carefully’ – to follow Jesus you don’t have to leap in unthinkingly, without thinking of what it will really cost you. Take your time, this is a big decision. This is why before baptism we encourage people to come to mass and to learn about the faith as it is the most important decision you will ever make. Secondly, Jesus is painting two pictures of embarrassing failure – an unfinished building project and a surrender. Jesus is saying, ‘don’t start what you can’t finish’. Thinking of the big crowd around Jesus made me think of the parable of the sower and the seed that grows up quickly initially and then gets choked by the cares of life. The people in these parables and in the parable of the great banquet in the chapter before all end up missing out on the amazing invitation to life with Christ because they are held down and distracted by all the cares of their lives. 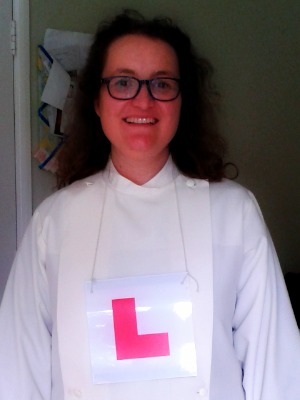 I’ve been joking since I got here that I should be wearing L plates – I’m a learner. It’s why I’ve come here to spend four weeks with you – to learn about parish ministry from the inside out. Often the words we read in the bible lose their true meaning in translation. When we hear the word ‘disciple’ we tend to think of men with beards that hung around with Jesus. What disciple really means is learner. Hence the L plates! We are all learners of Jesus, followers of Jesus. In fact, even Fr Simon still needs the L plates – he’s not the finished article either! The last thing Jesus says to the crowd is ‘none of you can become my disciple if you do not give up all your possessions’. The word translated ‘give up’ here is more like ‘say goodbye’ – Jesus says we have to say goodbye to our possessions. If I want to learn from Fr Simon and from all of you while I’m here in Plymouth, I need to drop quite a lot of things. I need to come with an open mind not a closed one. I need to come with an attitude to learn, not an attitude that I know it all. It’s very difficult to go on a hike across Dartmoor if you are carrying too much stuff. We can’t be real learners of Jesus if our minds are elsewhere, if we are carrying too much baggage. Jesus is saying ‘repent! Wake up! Come and see the world in a whole new way with me. Say goodbye to your old life, say goodbye to those things which stop you from focusing on me.’

Which are the possessions that are stopping me from being able to follow Jesus fully? They might be emotional baggage, they might be real physical things, they might be sin in my life, or a problem that just won’t go away.

Think of one thing now that is weighing you down, that is stopping you from following Jesus fully. In your mind’s eye imagine that thing is in a rucksack on your back. Feel the weight of it. Now imagine taking that rucksack off and putting it on the floor. Jesus says you can leave it there: you don’t need to carry it any more. When you come up to receive Christ in the sacrament in a moment, imagine leaving that thing, whatever it was, under your chair, come to the altar unburdened, come and receive Christ and be part of the wonderful journey of walking with Jesus and living life in all its fullness. Amen.

In preparing for this sermon I read about how the Christ in Pasolini’s film The Gospel of St Matthew (1964) is constantly on the move. In this bible passage Luke describes Jesus as walking and then turning to the crowd. If I had had a projector screen, I might well have shown this film clip: