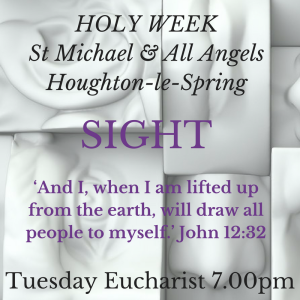 Here is the second of my series journeying through the senses this Holy Week:

I wonder if you have ever been waiting on a train platform or an at an airport arrivals gate? Have you watched the people – have you watched those anxiously waiting, exchanged smiles with them as the time ticks down to the arrival? Have you watched those emerging from the automatic doors, pushing their luggage trolley and looking around like a meerkat until a smile of recognition spreads across their face? Eyes lock, smiles widen and you can feel the palpable joy in the room.

You’re a sight for sore eyes! We say, when we see someone we haven’t seen for a long time.

Joy and love and healing are felt, often in that first glimpse of the person or place we’ve been longing to see. Those early immigrants to America felt a sense of great hope as they sailed into the Hudson in New York and saw the Statue of Liberty, welcoming them.

My grandmother misses her home in Lancashire that she left over 50 years ago, so much so that she will often watch a television programme just because it contains scenes of the countryside where she used to live. Just seeing it again is a tonic to her.

Research shows that for people with dementia, even if they don’t recognise the person visiting them, it brings them tremendous benefit to have a friendly face come to see them.

When I was in Rome on holiday last year, I decided I wanted to go to the Vatican and see the Pope at one of his weekly appearances. It was kind of irrational but I just thought, I’d like to be able to say I’ve seen the Pope. Seeing things with our own eyes feels important to us somehow. It’s a human instinct. It’s why people still line the streets when royalty visit, just to catch a glimpse. When I saw the Pope all I could really see was a forest of selfie sticks in the air trying to take a picture of him. Even though anyone can buy a postcard with an image of the Pope, everyone there wanted their own picture. I’ve still got mine, a grainy image of a tiny Pope in the distance sitting on a throne. The Greeks in our Gospel reading this evening come to Philip and say ‘sir, we wish to see Jesus’. They just wish to see him. They don’t ask to speak to him, to touch him, to eat with him. They just want to see him.

I think I understand this urge.

Jesus rather cryptically says ‘when I am lifted up from the earth, I will draw all people to myself’. This echoes his words to Nicodemus earlier in the gospel where Jesus refers to the serpent in the desert being lifted up. In the book of Numbers we read of the Israelites complaining about their experience in the Wilderness and how much better their lives had been in Egypt. A plague of poisonous serpents begins to sting and kill people. Moses creates a serpent figure from bronze and puts it up on a pole. All those who gaze at the bronze serpent are healed. So Jesus says, just in the same way, I will be lifted up on a pole and will draw all people to myself. He will be lifted up on the cross and it will become something that brings life to people to gaze on it. For us, to gaze on a cross gives us hope.

A priest I did a placement with was doing a wedding rehearsal. He said to the bride and groom, ‘if you feel yourself welling up or getting the giggles, focus your eyes on this cross here, it will help you calm down and stay focused’ then he added, ‘Actually, that’s good advice for life after you’re married too – when in doubt, focus on the cross.’

There is power, and love and healing in the cross. We are going to spend some time now meditating on that by watching this short film. As you watch, let Jesus speak to you, let him draw you to himself and all those who are in need of healing.

This film can be watched while playing this music (or something similar):

Pippin the Hobbit with a pint. Enjoying a drink in Old School Taphouse after our walk. #lukasbeer