A quick update to this post I wrote in 2011. Hope and Social have now recorded the show ‘Bring the Happy’ which is currently on tour.  It is still really powerful, even in recorded rather than live form. I defy you not to have a tear in your eye! If you get the chance to see the show live, do. One of the best shows I’ve ever been to.

Bring the Happy performance by Invisible Flock and Hope & Social

Last night I had the privilege to attend the Bring the Happy performance by a group of artists called Invisible Flock supported by the band Hope & Social.

Here’s a description of the project from the BBC website:

Thousands of people’s best memories of Leeds have been captured in a giant “happy map”.

Three artists began a project last year to record memories of people from the city to create the interactive piece.

A glass cylinder marks a spot on the map where something good, great or life-changing happened. The higher the tube, the happier the memory.

One memory reads: “As the clock struck midnight on Millennium Square, 2010, it started to snow.”

Bring the Happy is the brain child of a group of Leeds-based artists called Invisible Flock.

The performance at Northern Ballet last night was a beautiful journey through the thousands of memories gathered by the artists from people from all walks of life in Leeds. It was one of the most profound experiences I have had outside of church!

Ultimately, it was a collection of people’s stories, people’s lives. In focusing on people’s happiest memories it also threw into relief people’s grief and sadness as well. And I think it was in the undercurrent of melancholy that a sense of solidarity and beauty pervaded the atmosphere of the room we were in. The whole gamut of human experience was shared.

I took a few pictures which hardly show how beautiful this evening was. 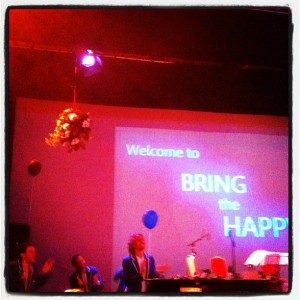 We were all sitting around tables decorated with balloons and were given an ‘order of service’ with song words in, written by Hope & Social – and being a Hope & Social performance there was plenty of communal singing! 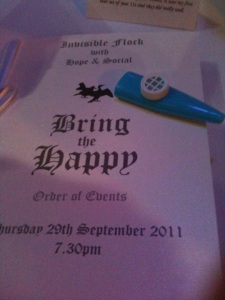 It looked like a wedding reception and at many times it felt like one – lots of laughs and tears shared by the attendees all united in this experience of sharing life stories. 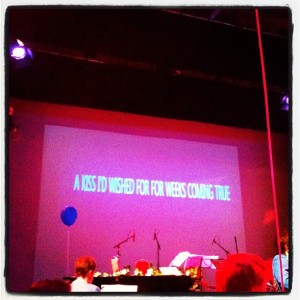 One of the collected memories was:

A kiss I’d wished for for weeks coming true

This was turned into a chorus which we and the band sang while the artists read memories of first love from their collection.

Many of the memories the artists collected were about intoxication. 90s rave music played, we waved glow sticks and were given shots of vodka as memories of being out on the lash in Leeds were read out. I smiled as one of them I share – dancing at Move on Up on Wednesday nights at the Underground. 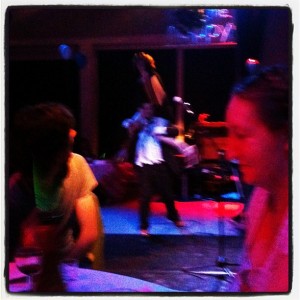 There were also lots of memories of the old dance halls of Leeds – many mentioning dancing the gay gordon at Mecca in the 50s. The band played a waltz and we all went onto the dancefloor, reliving these borrowed memories together: 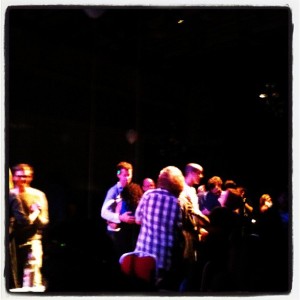 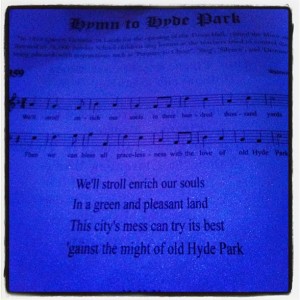 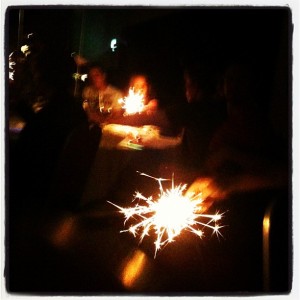 A moving story was told of two young scally lads who shared memories of ‘Nana’ who had died. A New Orleans style jazz song played as a funeral march was played in memory of ‘Nana’: 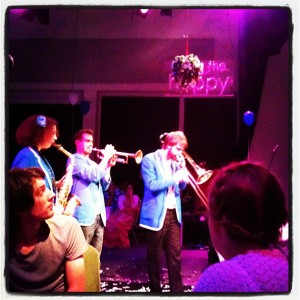 These are just tiny glimpses of what was an incredible evening. The performance closed with the Ballad of Leeds – written by Hope & Social and based on the memories of Leeds people – the first line is ‘I was born in Quarry Hill’ – the same spot where we were sitting that had once been a social housing project in the 60s and 70s and later demolished to make way for all the arts buildings there now.

Yeah, my mum's Simnel cake was worth driving 366 miles in one day for! #simnelcake #easter