I wasn’t going to blog about Greenbelt this year but decided to as it’s nice to compare year on year. I did a lot of posts about it last year but I’ll just do a short, mostly visual one this time.

This was the first year that I was ‘working’ at Greenbelt, I had great fun being on the Big Bible Project‘s stand (click the link to see pictures of me!) and talking to people about links between faith and social media. Working on the stand in ‘G Source’ meant that I didn’t get to see that many things this year but actually all the things I saw were absolutely first class!

This was described as a performance lecture and involved Peterson finding gender non-conforming characters in the bible and performing little vignettes. The most moving part was his portrayal of the Ethiopian eunuch who was baptised by Philip. Just a couple of chapters after the chapter of Isaiah he reads with Philip (53) come these verses which he read in tears:

Let no foreigner who is bound to the Lord say,
‘The Lord will surely exclude me from his people.’
And let no eunuch complain,
‘I am only a dry tree.’

4 For this is what the Lord says:

‘To the eunuchs who keep my Sabbaths,
who choose what pleases me
and hold fast to my covenant –
5 to them I will give within my temple and its walls
a memorial and a name
better than sons and daughters;
I will give them an everlasting name
that will endure for ever.
6 And foreigners who bind themselves to the Lord
to minister to him,
to love the name of the Lord,
and to be his servants,
all who keep the Sabbath without desecrating it
and who hold fast to my covenant –
7 these I will bring to my holy mountain
and give them joy in my house of prayer.
Their burnt offerings and sacrifices
will be accepted on my altar;
for my house will be called
a house of prayer for all nations.’
8 The Sovereign Lord declares –
he who gathers the exiles of Israel:
‘I will gather still others to them
besides those already gathered.’

If you have a chance to see this show or any of his other works, do. The best thing about this performance was that you go away both praising God and also desperate to read the bible again – can’t be a bad thing!

I met a friend from twitter who recommended I go along to this, so I did, with no expectations. It was one of the most beautiful services I have been to. Described as an ‘ancient-future’ communion service it really hit the spot for me. Formal anglo catholic worship with incense and candles alongside a DJ playing music throughout accompanying the liturgy (never overpowering it) along with music from the wonderful Accord choir. Here is a snippet I recorded from the Kyrie Eleison:

Hope and Social in the Performance Cafe

Readers of this blog will know that Hope and Social are one of my favourite bands. They played a fantastically intimate gig in the Performance Cafe on Sunday night. Shame Gary Stewart wasn’t there but it was still brilliant all the same. It was lovely to introduce an old friend to this great band!

U2charist with Luminous and Metanoia 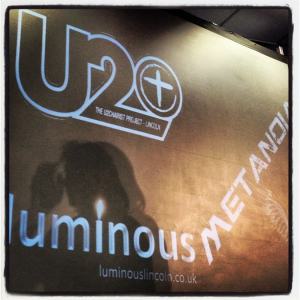 With the play on words in the name this had the potential to be cheesy or just plain bad but actually was another absolutely wonderful worship service. All the songs were U2 songs and they each fitted for the parts of the liturgy they were sung in. So we started with Beautiful Day, for example. One of the best things for me, however, were the wonderful visuals used throughout – both photos and video. Those used during communion moved me to tears – silent clips from the Passion of the Christ.

I leave you with a gallery of images I took (they’re on a Creative Commons license if you want to use them – just say where you got them from!) from this year’s Greenbelt that will go down for me as the wettest but perhaps the most worshipful one I’ve been to yet!

Check out the picture of the supernumerary rainbow! They’re quite rare apparently!

Click any image below to enlarge it and view the gallery in slideshow format.