A service on Twitter? How does that work then?

Yesterday a remembrance day service was held on Twitter at 10.15am (UK time). The service will be repeated tomorrow at the same time. It was the brainchild of James Thomas, a Methodist from Cardiff who got together with the Rev Joanne Cox (who I had the pleasure of meeting at Greenbelt this year) to make it happen.

Lots of people look at me with bemusement when I enthuse about Twitter. Even more so when I enthuse about Twitter’s application and uses in Church-based activities. So I thought this Remembrance service would make a good ‘case study’ of how powerful Twitter can be. The way it worked was that a Twitter account was set up for the service: @poppy_tweet. Then at 10.15, the tweets (140 character-long messages – like texts) started. I think the majority of these tweets were written before the event and carefully ordered – just in the way one would plan a service of worship in the normal way. Anyone could choose to view the tweets from @poppy_tweet, the tweets came in a measured way, giving the ‘viewer’ enough time to read, reflect and pray. The whole service took about one hour. You will see that there were three main people tweeting as part of the service: @poppy_tweet, @revjoannecox (who tweeted the sermon) and @jhoncooper who shared a meditation on peace. Other people took part by tweeting with different ‘hashtags’ – the main ones being #weremember and #wewillrememberthem – these hashtags work as links on Twitter – if you click on one on Twitter you will see all the tweets containing that hashtag – it’s a way of tracking topics on Twitter.

I reproduce the main tweets of the service below. This doesn’t completely give you an idea of how it works but hopefully you can see how well put together the service was, I have put in the videos that were referred to in the service at the appropriate points: 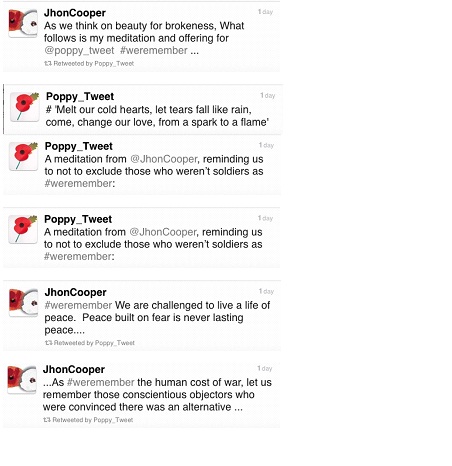 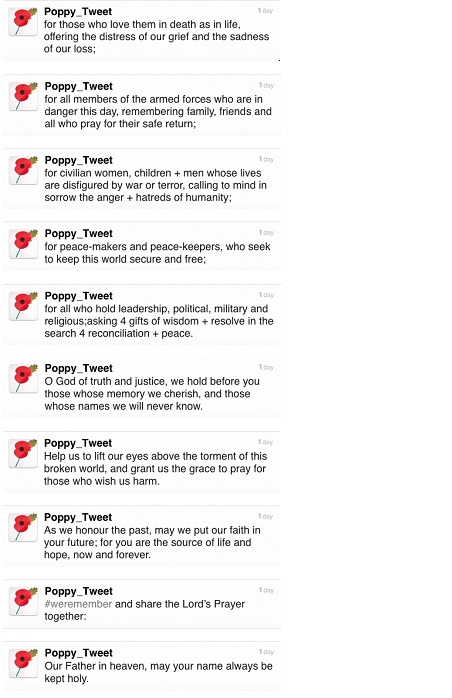 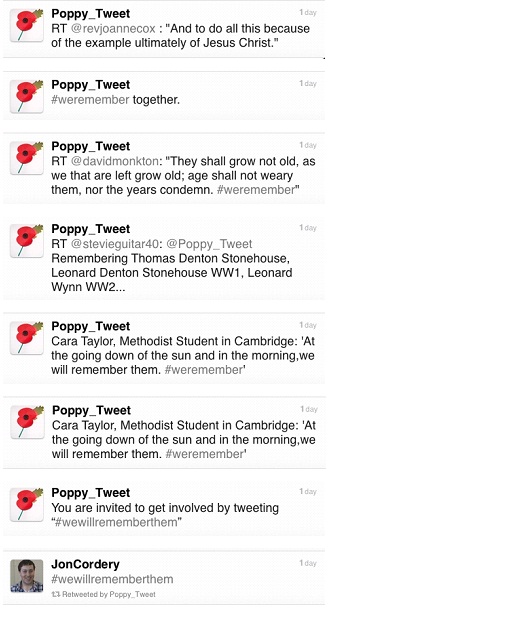 The service continued with people tweeting the names (and sometimes rank) of those they wanted to remember as part of this online act of remembrance. It was very moving seeing all the tweets being shared about grandparents, parents and more recent soldiers who have died in service of their country.

I applaud the people who put this together and made it happen – in my opinion, a brilliant way to engage people in an old act of worship in a new way.

Here are some of the major press articles written so far about the Twitter Remembrance service:

Becoming Elizabeth is worth watching for the production values alone. This is a genuine photo of my tv screen in episode 3, looks like a renaissance painting! #becomingelizabeth @starzplayuk