Nevertheless, she persisted: the women who stayed at the cross

Last week I saw this very moving blog post about an artwork created at Cuddesdon theological college sharing difficult and negative things that women ordinands and priests have had said to them (do have a read).  The title underneath the artwork is the phrase Nevertheless, she persisted.

When I was stuck inside in the snow I started to think about this and was reminded that it is the women who remain with Jesus to the bitter end after all the male disciples have scattered. Then I thought of how many of those women are named. Not very many of them are named – a lot of them were called Mary (I’ve always felt a bit sorry for the one who is recorded as ‘the other Mary’). So in an idle moment I tried to find a list of all the women named in the New Testament and I made this word cloud to show how the women stayed with Jesus at the cross: 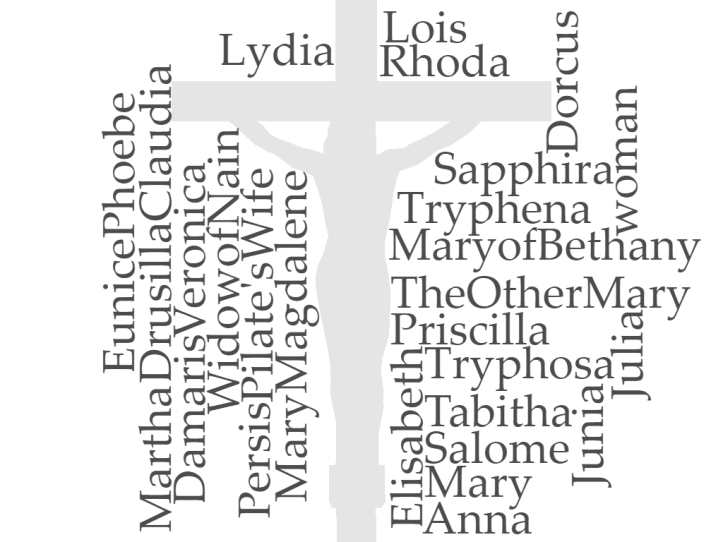 I was quite surprised by how short the list was and how many of them are only referred to by their relationships to men (although of course this was extremely typical for the time and pretty typical around the time I was born!) I had a similar reaction when seeing this graph today of the ratio of women’s dialogue to men’s in Oscar winning movies (spoiler alert – it’s not much!)

Not many of the women in the New Testament are named, but the gospels record that ‘many women’ were there at the crucifixion. They persisted and because of their persistence, we have a gospel to proclaim with them.

Here are some articles I have written on women in the New Testament that you might like to read this Lent:

A meditation on St Veronica

I have hope, with the #metoo movement and recent speeches at the Baftas, Golden Globes, and the Oscars; with calls for closing the gender pay gap; women’s voices are beginning to be heard.

I’m looking forward to the new film about Mary Magdalene coming out this month. Films always reflect the times we are living in and I think this one might just tap into the current mood for change for equality for all: