One of the readings in Mark’s gospel this week as part of the Big Read I am taking part in is this very moving account from chapter 5:

And a great crowd followed him and thronged about him. And there was a woman who had had a discharge of blood for twelve years, and who had suffered much under many physicians, and had spent all that she had, and was no better but rather grew worse. She had heard the reports about Jesus and came up behind him in the crowd and touched his garment. For she said, “If I touch even his garments, I will be made well.” And immediately the flow of blood dried up, and she felt in her body that she was healed of her disease. And Jesus, perceiving in himself that power had gone out from him, immediately turned about in the crowd and said, “Who touched my garments?” And his disciples said to him, “You see the crowd pressing around you, and yet you say, ‘Who touched me?’”  And he looked round to see who had done it. But the woman, knowing what had happened to her, came in fear and trembling and fell down before him and told him the whole truth. And he said to her,“Daughter, your faith has made you well; go in peace, and be healed of your disease.”

This bible passage to me is like a deep refreshing fresh water pool that I can dive into at any time. 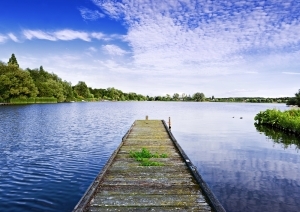 There are so many depths to this story – even more when you consider that this encounter happened in the middle of Jesus’ hasty walk through the crowds to the home of Jairus where a little girl is dying.

This encounter tells us a lot about Jesus and how He deals with us.

It tells us firstly that Jesus always has time for us. He’s never too busy to stop and listen to what you have to say. He always spots those on the edges of the crowd (think of Zacchaeus hiding in his tree!) and those people he speaks to only have to make the slightest gesture to get his attention – in this case it’s simply a touch of his robe. We can often think to ourselves that others are more worthy of Jesus’ attention than us. In this story, one would usually put the little girl before the older woman in terms of who should be seen first. Jesus doesn’t operate like that. It takes some real faith to even think Jesus might want to heal us, but just a tiny gesture is enough. ‘Say the word and I shall be healed’ (Matthew 8:8). A big part of becoming a Christian is recognising that God does think we’re lovely enough, that we’re worthy of his attention, that Jesus wants to heal us, He cares about us that much. So often we don’t dare believe that that is true.

Secondly, what struck me as I read the passage this time was that something internal happens to both the woman and to Jesus. The woman feels in herself that the bleeding has stopped – she somehow knows that she’s healed. Jesus feels in himself that power has gone out from him – an astonishing description. It seems like some kind of divine exchange has gone on. The woman has exchanged her pain for Christ’s healing. Jesus always enters into our suffering – he is suffering with us when we suffer. He replaces our pain with his healing.

Lastly, I noticed that Jesus says to the woman at the end ‘be healed’, not ‘you are healed’. Although her illness seems to have stopped immediately, perhaps what Jesus is saying is ‘the healing process has just begun’. Healing has to do with wholeness. That woman might have stopped bleeding, but the years of rejection, poverty and suffering would have taken its toll. If it had happened today, she would have been encouraged to see a counsellor to help her get over her poor image of herself (as unworthy and rejected) and begin life as a new person being brought back into public life.

This can happen as we become Christians. Christ heals us and forgives us our sins but our first encounter with Jesus is only the beginning: we all go on ‘being healed’. Jesus says ‘go in peace and be healed’: keep on healing, keep on receiving from me. We’re all unfinished! Christ continues his work in us:

And I am sure of this, that he who began a good work in you will bring it to completion at the day of Jesus Christ.

My friend Pam wrote a very moving post about this bible passage this week as well which I would encourage you to read: http://pamsperambulation.wordpress.com/2012/03/06/falling-over-the-pile/